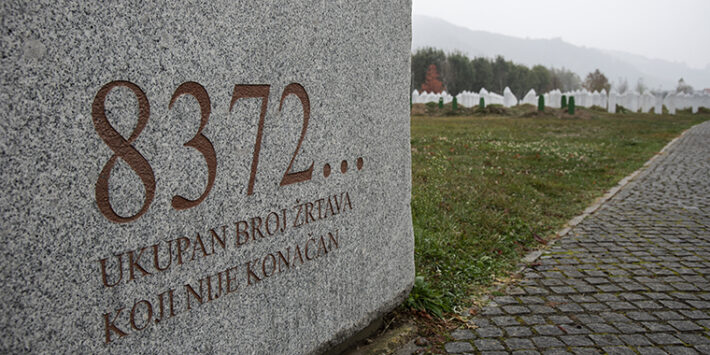 8372 of killed in Srebrenica Genocide – and the number is still not definite; relatives and officials are still searching for missing people.

Written and edited by Amna Dumpor and Nihad Filipović

We put above the video clip and share this message to commemorate the victims of Srebrenica and raise awareness about the Genocide which took place in Bosnia and Herzegovina in July 1995. We sincerely hope that these and similar initiatives by the citizens and human rights activists of RS and Serbia will help promote peace and political stability in BiH and the Region, helping to build a much needed concensus, in the process of reconciliation and acknowledging the universal truth, so that the country can move forward.

The Genocide happened as a result of Serbian-Montenegrin aggression on then The Republic of Bosnia and Herzegovina (RBiH). Today, we still hear official denials that what happened in Bosnia was a civil war. This narrative is wrong and deeply misleading. It was, in fact, a sheer and well planed brutal aggression by Yugoslav (Serbia and Montenegro) army directed from Belgrade.

Yugoslavia (in effect, at the time – February/March 1992., meaning Serbia and Montenegro) had its heavy military presence on the territory of RBiH. By means of mass propaganda and the highly toxic nationalist rhetorics and rallies, the president of Serbia Slobodan Milošević who was supported by Serbia's ruling political class and the cultural elite, led the local Serb population in Bosnia to fight against their fellow citizens. Milosevic, who was a leader of the communist party since 1986 and of Serbia since 1989 was well aware of the efficiency of using nationalism as a political weapon. He thus brought back centralised control in the Kosovo region and fuelled Serbian nationalism in general, in order to create connections between ethnic Serbs from various republics of the federation.

In their joint political and military venture, they orchestrated the whole murderous campaign, and planed psychological and military warfare against RBiH, in order to create a Greater Serbia – by destruction of the Bosnian state and its native Muslim population. Deploying a very crafty military strategy, they changed the name of military units of Yugoslav people's Army (JNA) which stayed on the territory of Bosnia and Herzegovina, after the referendum and Bosnian Parliament Declaration of Independence, March 1992., into the Army of Republic of Srpska (VRS) for which they provided firearms, ammunition, commanding officers, financial support, diplomatic support, as well as the special paramilitary and secret service forces from Serbia, employed to do the dirty work of mass killings and extermination of Bosnians, especially Bosniaks – Muslim population.

Vojislav Šešelj, founder and president of the Radical Party of Serbia (RPS), at International Criminal Court in the Hague, as an accused for war crimes in Bosnia, said the following:

“The Bosnian Serbs did take part. But the best combat units came from Serbia. These were special police commandos called Red Berets. They're from the Secret Service of Serbia. My forces took part, as did others. We planned the operation very carefully, and everything went exactly according to plan.”

This all happened whilst Bosnia was recognised by Organisation of United Nations as an independent country.

The clip above is telling us about those mass killings of Bosnian Muslim population (Bosniaks), after the fall of so called UN Safe Area of Srebrenica. More then 7.000 people are indicated as the victims of Srebrenica Genocide but the actual number is more then 8.372., as many are still unaccounted for. It is important to emphasise that this clip was made by people of Serbian ethnic origin, which is encouraging, given the fact that Republic of Serbia and Serbian communities in Bosnia until this day still don't recognize these mass killings in Srebrenica in July 1995., as an act of Genocide.

“Through error, misjudgement and an inability to recognise the scope of the evil confronting us, we failed to do our part to help to save the people of Srebrenica from the Serb campaign of mass murder.”